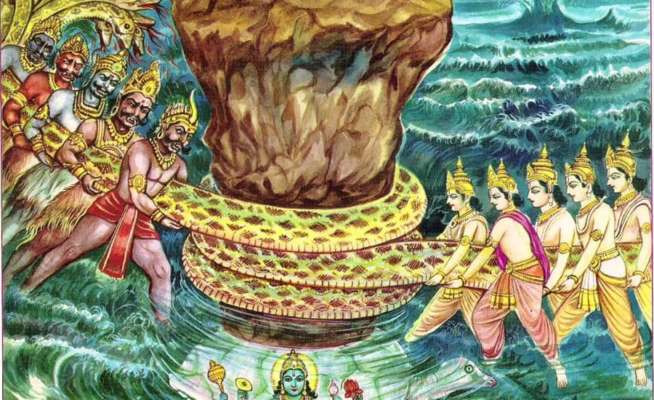 Cannabis holds a unique place in Indian mythology. Its considered one the five sacred plants finding a mention in the Atharava Veda.Other references alluding to the historical use of Cannabis in ancient Indian culture can be found in Rig-Veda, Sushruta Samhita and the Mahabharata.

There are references to it being called “the food of the gods”, its been called Indrasana – food of Indra, Shivabooty – Shiva’s plant. And amongst names used to describe it are Vijaya, Ajaya, Siddha, Madini and Mohini – a source of happiness, joy giver and liberator.

Hindu legend has it that when the oceans were being churned by the devas and asuras in search of amrut – the nectar of immortality, a lethal poison names Halahala was released. Halahala was said to be so intensely potent that it could destroy all creation. To protect the universe, Lord Shiva consumed the poison which turned his throat blue and caused him immense agony. In different tellings, at this point the Goddess Parvati, his consort or the other Devas offered him ground bhang to soothe his pain.

Another version of the story about the churning of the ocean says that marijuana plants grew wherever drops of amrut fell when it was finally brought up from the oceans. A fourth version believed that Lord Shiva created cannabis from his own body to purify amruta.

Yet another creation story also associated with Lord Shiva, tells the story of how a miffed Shiva was wandering around after an altercation with Goddess Parvati and fell asleep under a cannabis plant. On awaking he was hungry and consumed some of the leaves of the plant he fell asleep under. Due to its refreshing qualities the plant soon became his favourite food.

Cannabis in its bhang form is consumed during the festivals like Holi and Shivratri. It is offered to Shiva as sacrament in many rituals associated with his worship.

Among the ascetics, the Naga babas and Aghoris, are known to use bhang regularly as a way of trying to connect with divinity.

Amongst Nihang Sikhs, a traditional group of sikh warriors known for their ferocity and bravery, bhang is offered and consumed as Sukha Prasad or Sukha particularly around the festival of Hola Mohalla. This connection with spirituality and divinity, with gods and warriors and with the legends of old and with cutting edge science today is what makes cannabis what it is – extraordinary