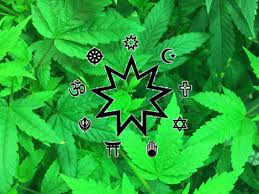 The use of cannabis for spiritual and religious purposes is as old as civilization itself. The herb, with its ability to induce new spiritual insights and understanding, has been (and still is) used by religious cultures all over the world. Learn about the mystical potential of cannabis.

All throughout history, humans have used mind-altering substances to guide them on their search for purpose, meaning, and enlightenment. Along with sacred cacti, magic mushrooms, and hallucinogenic brews, cannabis is still utilised by cultures all across the world where it plays an integral role in certain faiths and religions. Let’s take a look at the history of cannabis for religious and spiritual purposes.

One of the earliest examples of cannabis use in religion can be found in Taoism, the ancient Chinese belief system dating back to 4th century BC. The fundamental philosophy of Taoism is the harmony and balance of all things in the universe, symbolised by the yin and yang symbol. Early Taoist texts mention the use of cannabis in ritual incense-burners, where it was used to eliminate selfish desire and achieve a state of naturalness. Cannabis was also believed to assist with divination. Taoist priests and shaman used the herb to communicate with both good and evil spirits.

The Atharvaveda is one of the ancient Vedic scriptures of Hinduism and dates back at least 3000 years. According to the Vedas, cannabis is one of five sacred plants and is believed to hold a guardian angel in its leaves. The Vedas reference the herb as a source of happiness, a joy-giver, and liberator that was compassionately given to humans to delight the senses and eliminate fear.

According to one description, Shiva himself created cannabis from his own body to purify the elixir of life, resulting in the epithet angaja or “body-born.” It is believed that the word “ganja” originated from this term.

Three types of cannabis formulations are used for Hindu spiritual practices: bhang, which is a milky drink made from cannabis leaves and buds; charas, which is a type of hash made from resin; ganja, which is the smoked buds, of course. Consuming bhang cannabis milk to cleanse and purify the body during religious festivals is considered a holy act.

Like their Hindu neighbours south of the Himalayas, Buddhist practitioners in Tibet have a long tradition of using the herb for religious purposes. Gautama Buddha, the sage who established the religion of Buddhism in 5th century BC is said to have lived on nothing else but one hemp seed per day on his path to enlightenment. The Buddha is sometimes depicted holding cannabis leaves. Consuming the plant was believed to heighten awareness during ceremony and prayer, serving as an aid during meditation.

CANNABIS IN THE OLD TESTAMENT

While using cannabis in ancient eastern religions was common and widespread, little evidence was compiled on cannabis’ use in early Christianity until the 20th century. In 1936, Polish etymologist Sula Benet publicised a new interpretation of ancient texts from the Old Testament. She claims a mistranslation in the original Greek version of the text, which would give many religious texts a whole new meaning. According to her theory, the Hebrew word for cannabis “kaneh bosm” was mistaken for calamus, which is a plant that had been used to make fragrances. If her theory is correct, books of the Old Testament including Exodus, Song of Songs, Isaiah, Jeremiah, and Ezekiel refer to cannabis many times.

The Greek historian Herodotus (c.484 – 425 BC) informs us on the use of cannabis during religious ceremonies in ancient Greece. He describes how the Scythians burned hemp incense using containers or makeshift tripods over an open flame. Participants would gather in tents, inhaling the smoke for ritualistic purposes. The ancient Assyrians are also believed to have used cannabis incense during funerals and to ward off evil spirits.

According to Norse mythology, the cannabis plant contained the feminine energy of Freyja, the goddess of love, beauty, and fertility. Consuming the plant would allow her essence to enter one’s own body. There is evidence for the use of hemp and cannabis throughout many phases of life in early Germanic paganism. The plant was utilised during spiritual and fertility rituals and was seen as so important that hemp clothes and seeds were given as a gift to the dead. Even the harvesting of cannabis was cause for celebration.

Developed in Jamaica during the 1930s, the Rastafari religion involves the spiritual use of cannabis for various ceremonies. According to Rastafari belief, which rejects all materialism and oppression, cannabis heightens consciousness, increases pleasure in life, relaxes, and gets rid of negative energies. Rastafarians believe that the plant will bring man closer to their creator, Jah.

In the later 20th century, the Rastafarians’ use of cannabis was subject to scrutiny. Only after lengthy legal proceedings that culminated in the Religious Freedom and Restoration Act of 1993 was it established that consuming cannabis for spiritual and religious purposes was legal under US law.

CANNABIS IN OTHER RELIGIOUS MOVEMENTS

Although the use of cannabis for spiritual and religious purposes goes back many thousands of years, numerous modern movements and “new age” sects that use cannabis as a sacrament have sprung up in the past century.

Some of these modern movements include the THC Ministries, Temple 420, Green Faith Ministries, Cantheism, The Cannabis Assembly, The Church of the Universe, The Free Marijuana Church of Honolulu, and The First Church of Cannabis. The non-profit religious organisation Elevation Ministries opened its Denver headquarters, known as the International Church of Cannabis on April 20, 2017.