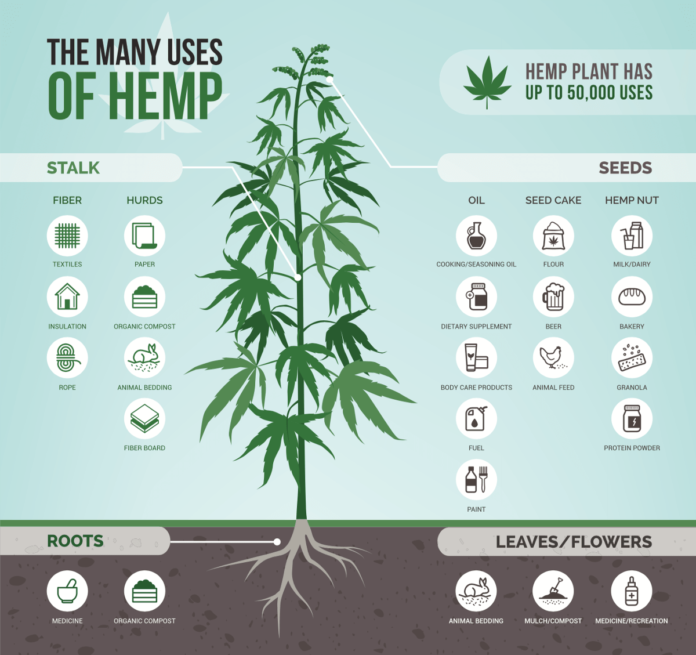 The COVID-19 pandemic has pushed a struggling economy into a full-blown recession. Acute agrarian distress may have been tempered by good monsoons, but the influx of migrants from urban areas has made more people dependent on small returns from the agricultural sector. While the environment benefited from low emissions during the lockdown, there are fears that governments globally may relax environmental regulations to jumpstart their economies.

Much-maligned as it may be, the cannabis plant can be an unlikely ally of governments in India as they fight the many crises the country faces.

Many conventional options tend to solve one problem but worsen another – the most obvious is the apparent tradeoff between economic growth and environmental conservation. We need innovation to go beyond this flawed dichotomy, and here’s where cannabis comes in.

Contrary to popular belief, cannabis is not the same as marijuana. Cannabis plants contain THC (Tetrahydrocannabinol), which is a psychoactive chemical that gives them narcotic properties. The THC levels in a plant determine its classification; high-THC cannabis is popularly known as marijuana and is used recreationally, while low-THC cannabis is called hemp (specifically from the cannabis sativa strain). While there’s no clear level of THC above or below which cannabis is considered marijuana or hemp, common legal estimates peg it between 0.3% to 1%. It is these high-THC varieties that have made cannabis outlawed in many parts of the world over the last century.

So How Did We Get Here?

Cannabis was outlawed in India as recently as 1985; not due to domestic opposition but as an extended consequence of American politics. Hemp’s disruptive potential in industries like paper and textile led vested interests in the USA to lobby against it in the 1930s and ’40s. Its association with recreational cannabis was highlighted, and as part of a decidedly racist war on drugs, it was prohibited.

Domestic politics in the USA had a global ripple effect which culminated in the 1961 UN Single Convention on Narcotic Drugs. Countries world-over adopted prohibitive measures. They criminalised ‘drug’ use, which till then might have been considered a health issue or even a part of their culture.

Things have changed a lot since, and the world is slowly moving past outright prohibition. Even the USA’s increased its tolerance for cannabis, with numerous states legalizing it in some manner or another. While recreational cannabis’ provocative nature captures headlines, its less controversial cousin, hemp, may be more worthy of our attention.In fact, in what seems like delicious irony today, India didn’t implement the convention in its entirety on cultural grounds; denying people bhaang on Holi was apparently too drastic. It had 25 years to implement the ban, which eventually took the form of the 1985 Narcotic Drugs and Psychotropic Substances Act.

Hemp’s vast potential is slowly being reckoned with. As cannabis researcher Anurit Kanti suggests, it could be a “wonder crop” in the ever-growing pursuit of sustainable development. Three primary factors have contributed to the popularity of hemp — its ease of growth, environmental benefits, and versatile uses.

Hemp’s ‘growing period’, from sowing to harvesting, is between three to four months depending on whether the plant’s fibres or seeds are being used. According to Dilsher Singh Dhaliwal, the founder of Everest EcoHemp, India’s largest licensed hemp growing company, the crop requires relatively few inputs. “We only use organic fertilizers when sowing, and don’t add pesticides at any stage. Hemp is extremely environmentally sustainable and only needs watering once, that too if it doesn’t rain.” Of course, these minimal water requirements are climate-specific (Everest’s farms are in Uttarakhand), and crops in dry areas will require more watering.

These easy-growing hemp plants actively benefit the environment. According toa report submitted to the European Commission, one acre of industrial hemp can absorb 15 tonnes of CO2 per hectare, making it amongst the best methods for CO2-to-biomass conversion. An article in Rolling Stone showed it could help reclaim contaminated and degraded land through a process known as “bioremediation”, evidence of which was seen even in areas devastated by the Chernobyl explosion. A recentresearch paper also found it reduced soil erosion and increased other crops’ yield when grown in rotation.

The uses of this apparent wonder-crop are wide-ranging and ever-expanding. It’s popularly used to make durable textiles which are more sustainable than water-intensive cotton products.

Relative to trees, paper made from hemp is reported to be of better quality; it also requires a quarter of the land and a fraction of the time to produce the same quantity of pulp. Hemp is also becoming a popular substitute for plastic and is currently used in Legos, car parts, and body armour.

In an era of global sand shortages and ecologically devastating sand-mining, its use in construction as an ecologically sensitive and energy-efficient alternative to traditional cement holds great promise. Studies in 2014 also showed it could be used to make carbon nanosheets on par with graphene, the (very expensive) industry gold standard used to manufacture supercapacitors. Supercapacitors are a key component of high-performance energy-storage devices required, for example, in electric cars. For regular vehicles, it can become an efficient biofuel. Hemp also contains Cannabidiol or CBD (which is not psychoactive), a chemical widely used in food and medicinal products which have numerous potential health benefits and few side-effects.

The world is increasingly recognising hemp’s handiness, and some even consider it as a silver-bullet against climate change. As the market hits new highs, China has unsurprisingly raced to capture it; despite some products being illegal domestically, they have become the world’s largest hemp grower and exporter.

India has slowly been trying to get into the game, but the shackles of the 1985 Act have held players back. The first steps were taken in 2016 where the government of Uttarakhand legalised the licensed cultivation of cannabis with THC levels below 0.3%. It made use of a provision in the NDPS law that permitted hemp cultivation for industrial and horticultural use. While all states are free to do so, a lot depends on the cultural associations of cannabis in a state and the political consequences of this potentially controversial reform.

Still, there has been some progress. The central government allowed cannabis research in Uttarakhand and Uttar Pradesh. Madhya Pradesh was planning to follow suit last year, but a change in government stalled the move. A long-term clinical trial of the medicinal use of cannabis was announced involving the Indian Institute of Integrative Medicine, the Council for Scientific and Industrial Research, and the Tata Memorial Clinic. Private entities have already entered the medicinal cannabis space under the banner of AYUSH, taking advantage of references to cannabis use in Ayurveda.

A nascent hemp private sector has also sprung up in India in the last five years, according to Delzaad Deolaliwala, co-founder of the Bombay Hemp Company (BOHECO). “When we started out in 2014, there was barely anyone in the market, but now there are over forty companies across sectors in the country,” he said. BOHECO’s diverse product range includes textiles, food and medicines, but they are currently focussing on scientific research for which it has partnered with the G.B. Pant National Institute of Himalayan Environment in Uttarakhand and the National Botanical Research Institute in Lucknow.

“Research and development are crucial at this point”, says Dilsher. “For commercial and industrial use, you need standardization in your crops. Because hemp is legally classified as a narcotic commodity, it comes under the purview of the excise department and not an agricultural department. Since the excise department is a regulatory agency and not a research organisation, no research on hemp was possible, until recently”. He went on to add that “keeping THC levels below 0.3% isn’t always easy, since Indian cannabis species tend to be high-THC… seeds need to be grafted with imported low-THC varieties, a process that involves a great deal of trial-and-error.”

These difficulties, combined with the limited number of states it can be legally grown in means that even where there is demand, supply isn’t to be found. According to Tarun Jami, the founder of GreenJams, a start-up producing carbon-negative construction material, limited supply has made the cost of products like hempcrete unjustifiable. A block of hempcrete costs around Rs. 200, about six times the price of concrete. Since sustainable architecture focusses on locally procured raw material, importing hemp isn’t a viable alternative.

Jami instead uses agricultural residue to produce other carbon-negative construction materials like agrocrete. Agrocrete blocks, though slightly less efficient as insulators than hempcrete, are stronger. Most importantly, they cost the same as concrete, and their raw materials can be sourced sustainably.

How High Can We Go?

There’s been a lot of talk In India about turning the COVID-19 crisis into an opportunity. We’ve certainly got a crisis on our hands, but good intentions alone do precious little to help capitalise on it. The political scientist John Kingdon said three factors need to converge to take advantage of such a situation. The first is a problem with the status quo, which is glaringly evident on numerous fronts. The second is the availability of useful solutions, which in the case of hemp are plentiful. The last, and in this case the most important, is political will. In this context, it is slowly developing, but meaningful change will require greater urgency.

Anurit Kanti is optimistic that these limitations will be overcome, and that Indian hemp will soar to new highs in coming years. “As more governments reckon with the potential of the cannabis crop, they will change their stance,” he tells me. However, politicians need to appeal to voters, and the stigma surrounding cannabis among the public can tie the hands of the best-intentioned legislators. Here is where lobbyists like the Indian Industrial Hemp Association, the Great Legalization Movement and others come in, trying to sway public and political opinion in favour of the plant.

Their work has never been more necessary. With an economy that’s struggling to provide jobs, an agricultural sector reeling under decades of distress, a climate crisis which is going to disproportionately people, and government tax collection falling to perilously low levels, governments are fighting fires on far too many fronts. While hemp may not solve these problems in their entirety, Kanti says that the plant is certainly a solution that doesn’t sacrifice one cause for the other. This makes it unique; at a time when conventional wisdom sees economic growth and environmental protection caught in a zero-sum game, a plant like hemp, which benefits both virtues, becomes worth its weight in gold.