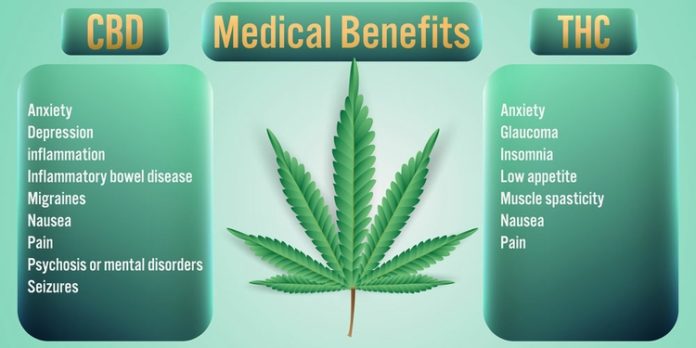 Cannabidiol, or CBD, and delta-9-tetrahydrocannabinol, or THC, are two of many different cannabinoids present in marijuana. When in the body, CBD and THC interact with cannabinoid receptors to help treat or limit the effects of various conditions.

There are hundreds of cannabinoid receptors throughout the human body that cause specific physiological effects. Potential uses of these cannabinoids include treating the following:

pain
nausea
cancer
appetite loss and eating disorders
Alzheimer’s disease
glaucoma
multiple sclerosis
muscle spasms
The most notable difference between CBD and THC is the lack of psychoactive effects for CBD, which does not typically cause the characteristic marijuana high of THC.

In this article, we explain more about the differences between CBD and THC.

The differences
Though CBD and THC are both found in marijuana and interact with the endocannabinoid system, there are some important differences a person should be aware of:

Getting high
THC may cause a person to experience a high.
Despite both being cannabinoids, CBD and THC interact with slightly different receptors in a person’s brain.

As a result, CBD is unlikely to get an individual high. On the other hand, THC produces the high people associate with using marijuana recreationally.

Medical marijuana that is CBD dominant has minimal THC. As a result, a person will not feel high when taking the medication.

Medical marijuana that contains THC will cause the person to experience a high when taking the medicine.

Where do they come from
Both CBD and THC are present in marijuana.

However, when a person takes a CBD dominant version of medical marijuana, they are using CBD from hemp, which is closely related to marijuana.

THC originates in the marijuana plant, and people extract it from that source.

Benefits
CBD and THC have similar effects for treating medical conditions. However, there is some variation in the uses of each substance.

People typically use CBD to help treat the following:

glaucoma
muscle spasticity
low appetite
insomnia
People may use either to help treat:

Each state varies slightly on how they define and regulate the legal use, prescription, or sale of marijuana.

Several states have approved the use of marijuana for recreational purposes. As with medical marijuana, recreational usage is not legal federally.

A person should look into the laws in their state before acquiring medical marijuana. If the state does not explicitly allow its use, a person could face legal issues for obtaining or using marijuana for medical or any other purpose.

Laws surrounding the use of medical and recreational marijuana are changing rapidly. A person who is considering using CBD or THC should check their local laws regularly as they may change or be changing.

Side effects
There are very few side effects with either CBD or THC.

In fact, CBD does not have known side effects. According to the World Health Organization (WHO), CBD is safe in large quantities, and the only potential side effects are likely the result of interactions with other medications a person may be taking.

A person consuming THC may experience some temporary side effects. These can include:

dry mouth
red eyes
slower than average response times
a general feeling of being high
memory loss
issues with coordination
increased heart rate
Teenagers, in particular, may experience adverse psychiatric effects from getting high. This may be because a teenager’s brain is still developing.

According to some research, regular or large doses of THC can increase the risk of developing schizophrenia in some people with a predisposition for the condition.

Neither CBD nor THC has any apparent side effects that are serious. Neither can be fatal when taken correctly. Also, people who use THC recreationally appear to have little risk of developing an addiction to it.