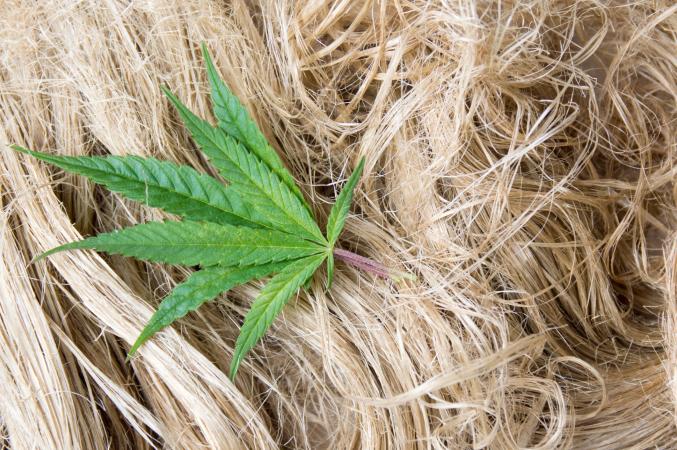 Hemp is the new, exciting and happening thing to be seen in the world of Indian fabrics. Yet to gain a momentum , it promises tremendous potential in the coming years. For a fabric that in many ways is as good as linen and seen as one of the best in natural fibres, it could usher in a new wave of smooth flowing clothing and apparel.

Hemp is a fabric produced from the cannabis sativa fiber or industrial hemp. It has been in existence since 8000 BC. Used by various civilizations in Asia, Middle East & China, it had been used for making paper, ropes, ships’ rigs, canvas, sailcloth, sacks etc.

The Hemp fibre or industrial hemp is obtained from the outer layer or the bast of the Cannabis sativa plant, more popularly known as that meant for producing marijuana or hashish. The narcotic content is because of tetra-hydro-cannabinol content (THC) that is much as 20 % and causes the high when smoked. Industrial hemp contains 1 per cent THC only.

This fibre has some very incredible properties. It conducts heat, dyes well, resists mildew, blocks ultraviolet light and has natural anti-bacterial properties. It is used in many industries including paper, biodegradable plastic, construction, health food, chemical clean-ups and fuel. Automobile companies like BMW use hemp fibre to reinforce their door panels for better safety standards.

Uttarakhand is the first state in the country to legalize cannabis cultivation. The prospects for growing industrial hemp — a variety of the Cannabis Sativa strain, which has lower psychoactive properties than marijuana — are massive, attracting attention and investment.

The State government, in July 2018, granted licence to the Indian Industrial Hemp Association (IIHA), a non-profit organisation that promotes industrial application of hemp, to grow the fibre over 1,000 hectares, on a pilot basis. The cultivation is to be in villages in the Pauri Garhwal region of the state, said the founder President of IIHA, Mr.Rohit Sharma.

“Even though the policy to allow cultivation of non-narcotic cannabis was formulated in 1985 along with opium, hemp cultivation failed to take off in the country as proper procedures were not laid down for its cultivation, procurement and use, unlike that in the case of legal opium”, he said.

“About five years ago, when we started working on industrial hemp, we tried to figure out why India is not tapping on this $1-trillion industry unlike advanced economies in Europe and North America and even China. We then realised that though the authorities are interested, they had little idea how to proceed on this,” Sharma told the media.

IIHA subsequently was able to convince the then government in Uttarakhand to come out with a policy for hemp cultivation, which was adopted by the subsequent government with some changes.

Hemp, a high-value crop, is ideal for a State like Uttarakhand where topology and acute water scarcity come in the way of growing conventional crops. Hemp, which can be harvested in three months, requires very little water and in places where water is abundant two crops can be grown, he said.

Both hemp seed oil and hemp protein powder, made from the leftover cake which is rich in digestible proteins, are popular world over, Sharma said.

With laws that make the growing of marijuana and cannabis prohibitory, in Mumbai an organization named BOHECO has been working with policy makers, scientists and farmer groups to see how India could benefit from the growing of this crop for manufacturing hemp within the country’s legal stipulations.

The Bombay Hemp Company (Boheco) is advocating the use of industrial hemp in textiles, material sciences, and health and nutrition.

“Cannabis is still looked at as something that gives you a high. Few know there are a lot of uses for hemp and the wild cannabis which is grown abundantly in India can rarely be used for intoxication by any part of the cannabis plant, apart from its flower,” said Sanvar Oberoi, one of the co-founders of Boheco.

They are doing studies on the wide spread wild cannabis in North India to standardize low THC seeds that could eventually be used to grow industrial hemp. BOHECO is involved in a number of exciting projects: they have already developed hemp denim in conjunction with Arvind Mills, they are working with IIT Delhi on technology to process hemp fibres from the plant and also have also launched two hemp fabric brands.

Label B sells hemp clothing at affordable prices via Boheco.org and is present in 10 boutiques across the country.

Their second, newer label is called Hemp Fabric Lab (Hempfabriclab.com) where they sell this raw material to designers willing to try out hemp in their designs. BOHECO is happy to sell this fabric to consumers with no minimum purchase requirements. Thus, one could order just 1 metre of fabric if one wished.

They urge mindful  customers to be environmentally supportive since even making ten percent of one’s wardrobe sustainable would make a huge difference!”

It has picked up rapidly

Bengaluru-based startup B.E. Hemp India uses yarn made of hemp to make clothing and accessories like scarves, slippers, wallets and bags. Namrata Hemp Company plans a hemp farm in Andhra Pradesh to cultivate industrial hemp and set up an R&D facility and warehouse.

Hemp companies in India like Boheco and B.E. Hemp have spent a lot of time educating stakeholders, including the government, and the end consumers about the properties of hemp. The first three years for the Bombay-based company were spent educating themselves and others around about the misconception.

Non-profit organisation Indian Industrial Hemp Association (IIHA) makes a clear distinction between hemp and marijuana. It says hemp commonly refers to the industrial/commercial use of the cannabis stalk and seed for textiles, foods and medical purposes.

The central government, it seems, has given the green signal. However, the states can form the provisions of the rule. “As long as there is a particular style of hemp seed, the plant can be used for various industrial purposes. However, there is yet to be a seed bank developed in India.

BE Hemp’s founder Elston Menezes said there is still confusion around the regulations. “The states, starting October banned the sale of hemp seeds in India. Only the fibre sourced from the stalk can be sold.”  Elston, with his partners, Benson Martis and Sayantan Halder, started BE Hemp three years ago but had been promoting cannabis for the past five years through flea markets. Due to this rule, he has stopped selling hemp seeds in India. He sources hemp fiber and hemp paper from Nepal, China and the US, apart from India.

When Hemp came on the horizon, many countries saw a plant that was thought to be useful for producing narcotic substances like marijuana and cannabis alone. Later with research came Industrial hemp and so hemp fibre became a reality.

Countries across the world have realized the uses of the wonder fiber called Hemp. Egypt, Canada, Chile, Australia China, South Korea, Thailand etc. are some of the prominent names that figure in the list of countries producing Hemp for commercial purposes. Three countries have taken to Hemp in a big way. They are piloting and researching Hemp. China is the largest exporter of hemp paper and textiles. Most hemp apparel brands get their hemp supplies from farmers and factories in China. Canada is now the biggest producer and exporter of hemp seed products, including hulled hemp seeds, hemp oil, and hemp protein powder. Europe’s hemp industry has been focused around industrial uses, such as material for automobiles and construction.

How is the hemp fabric made?

There are eight stages:

It is a labor intensive process, but now that traditional methods have been replaced by modern day production methods, hemp fabrics are spun into a textile in a more efficient manner.

What are the advantages of the Hemp Fabric?

And what are the likely disadvantages?

Hemp as a plant

A plant that is fast-growing, that produces high-yield per acre of land, it is best grown in warm tropical zones or moderately cool and temperate climates.

Moreover, it benefits the soil it is grown in by leaving it in excellent condition after a harvest. The roots of the plant that penetrate the soil deeply protect it from runoff (prevents water from wasting). They build and preserve topsoil and subsoil structures just like the vegetation in forests by adding rich organic content to it and help keep it moist.

It can be grown on a range of soils, but tends to grow best on land that would produce a high yield of corn. The soil must be well drained, rich in nitrogen, and non-acidic.

Hemp grows successfully at a density of up to 150 plants per square meter, and reaches a height of two to five meters in a three month growing season. Hemp also produces an oil seed that contains between 25 – 35 % oil by weight. It is high in essential fatty acids and hemp seed offers outstanding nutritional value.

So how does one care for hemp?

Why then has it traditionally not been popular?

There were two reasons for this.

How did Hemp become popular?

The environmental crisis led to the focus on using substances that are more environmental friendly. The production of hemp fibre is a highly sustainable process. Being a carbon negative crop it actually absorbs CO2 from the air. It can be produced with half the amount of water and land that is required for cotton and has thrice the tensile strength of cotton. It also blends easily with other fibres. It doesn’t strip the soil of nutrients. On the contrary, hemp returns 60-70 per cent of all nutrients back into the soil.

In the 1980s, Chinese scientists made a breakthrough in figuring out how to remove lignin from hemp fibres without compromising on its strength. With hemp’s original qualities being similar to linen and properties allowing anything to be made out of it that is made out of cotton it paved the way. The fabric is porous and thus retains colour and is very breathable. Hemp clothing is now made highly durable and does not lose its shape easily. The fact that it is anti-bacterial and blocks ultraviolet rays is an added bonus.

Already you have international names using hemp in their products. Labels like Armani, Ralph Lauren and Calvin Klein have already made collections using hemp fabric. Sports brands like Nike and Patagonia use it in their athletic wear.