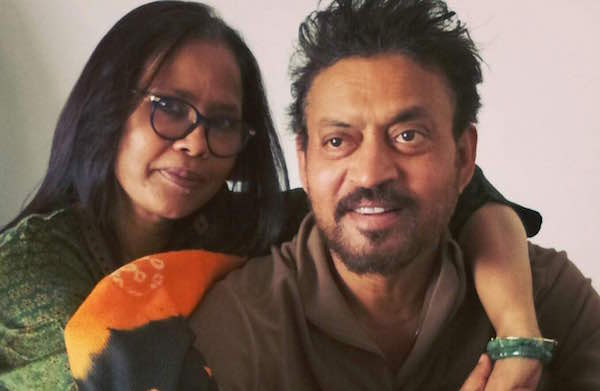 As Irrfan Khan’s wife Sutapa Sikdar shared an image of the hospital where the late actor underwent treatment for neuroendocrine tumour, she also asked for CBD oil to be legalised. Sharing a picture of the hospital in London where Irrfan Khan underwent his cancer treatment, Sutapa Sikdar wrote, “London revist looking at his hospital room from outside like everytime I did while he was there #walkingalone #wishyouwerethere #cancerpain #LegalizeCBDoilinindia.”

While she didn’t clarify the hashtag, CBD oil is considered a pain relief that is used by those being treated for cancer. Earlier, Singer Sona Mohapatra had earlier written of her own experience, “The TV stories feel like a farce esp CBD oil and ganja and Whatapp chats being talked about with such fervour. I discovered what the former was when my sister went through multiple surgeries for cancer last year. Was told of how magical the healing and pain alleviating this could be for her recovery. Unfortunately, we couldn’t find any easily in Mumbai. Cannabis has been the base of all Ayurveda till the British banned it I’ve learnt, thus taking away most of its efficacy.”

CBD oil has been discussed in relation to Sushant Singh Rajput’s death after alleged chats between Rhea Chakraborty and celeb manager Jaya Saha were leaked. In another exchange of text messages, she also spoke of facilitating purchase of CBD oil for actor Shraddha Kapoor.

Actor Meera Chopra had later tweeted, “Just asking, how is cbd oil freely available online if its illegal. I checked its avaialble on amazon too. Why no regulation if its illegal? #cbdoil.”

Earlier this month, actor Rhea Chakraborty was arrested by the NCB for procuring drugs. In the last few days, a number of top Bollywood stars, including Deepika Padukone, Shraddha Kapoor, Sara Ali Khan and Rakul Preet Singh were questioned by the agency. Although reports suggest that the names of other stars have come up in the investigation, there is no official word on the same.

Is CBD oil illegal in India? PinkVilla complied opinion of Senior Lawyers on chat about CBD oil in SSR case