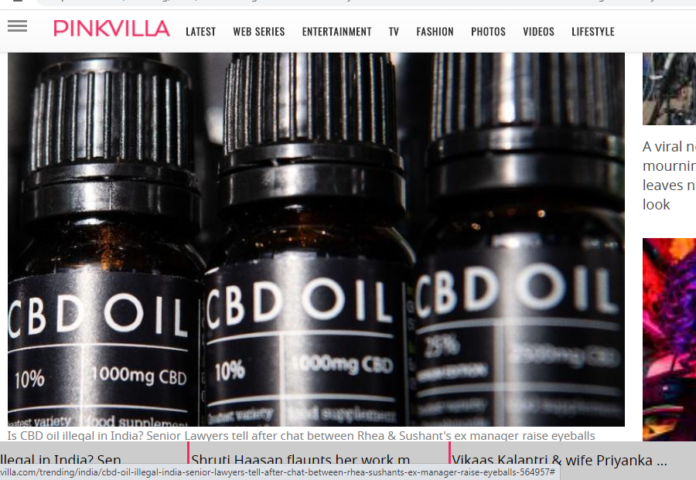 The investigation in the Sushant Singh Rajput’s demise case has opened a floodgate of sorts with a number of pertaining issues being looked upon. One of the topics which has been raging is around the use of CBD oil and the legal aspects around it. Given that CBD (Cannabidiol) oil is easily available online for purchase, the legality of it has left the common man in a dilemma. It was after a Whatsapp chat between Rhea Chakraborty and Sushant’s former manager Jaya Saha surfaced, that the legality of CBD oil became a pressing subject. In the chat exchanged by the duo, CBD oil’s mention raised many eyeballs. With very little information known to public, a frenzy of sorts happened but we have it covered for you. We happened to get in touch with lawyers who tell us if buying or consumption of CBD oil is illegal in India and what can amount to an offence.

What is CBD oil?

Is it Illegal in India? , Sankalp Kochar, a lawyer practicing at Madhya Pradesh High Court, tells us:

As per NDPS Act, 1985 possession or consumption of CBD is illegal. However, the government has made exceptions for the use of Cannabis for medical and recreational purposes and hence, some of these products are also available online as they are covered in the exceptions.

How much of the quantity of CBD oils is allowed as per the provisions of NDPS Act, 1985

CBD Oil manufactured from the leaves of the cannabis plant by pharamaceutical companies or other entities in compliance of the provisions of the Drugs and Cosmetics Act, 1940 and the rules formulated therein can be used by people for medicinal purposes in India. However, this all encompassing freedom to use CBD oil comes with two qualifications-

At times, CBD oil may contain a meagre amount of THC (Tetrahydrocannabinol), because it’s present at low levels in the hemp plant. For the usage of CBD oil to be legitimate it is essential that THC content should be less than 0.3 per cent as it has been classified as narcotic and a psychotropic substance by Gazzetee notification dt.19.10.2001 restricting the usage of THC in all its forms to less than 50 grams. Exceeding the permissible limits may attract the imprisonment and fine under the NDPS Act.

If any product contain THC (tetrahydrocannabinol) higher than 0.3 to 1.5 per cent will turn illegal under the NDPS Act.

Sankalp: A noticeable trend witnessed these days is that the investigating agency while assessing the quantity of narcotic substance also takes into account the quantity of neutral substances from a seized mixture and even the Apex Court in the case of Hira Singh vs Union of India approved this method of assessment. Therefore, it is advisable to consume CBD oil only pursuant to a doctor’s prescription

Do not confuse CBD oil with cannabis oil or hash oil.

In general parlance CBD oil is erroneously considered to be synonymous with cannabis or hash oil. However, they are entirely different as cannabis or hash oil have been set out as a narcotic drug and its usage is strictly governed by the provisions of NDPS Act attracting penal sanctions mentioned therein.

What a buyer must do:

Examine the ingredients of the oil. Prefer the oil extracted predominantly out of the leaves of the cannabis plant and ensure that presence of other suspicious ingredients shall be minimal

CBD oils should preferably be consumed only after consulting a doctor

Check the THC (Tetrahydrocannabinol) content. If it is present it shall be within the acceptable limits.(0.3 percent of the concentration or less than 50 grams).In such cases where THC is also an ingredient make sure that you have doctor’s prescription justifying its usage