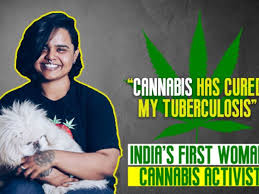 Priya Mishra is India’s first female cannabis activist who was on her death bed until cannabis saved her life. She was diagnosed with stage 3 lymph node tuberculosis and the prescription medications she took were making her situation worse. In 4 months time, cannabis did for her what those medications could not do… give her life back. Doctors said it would take years for her to come back to normal if she were to survive.

In my interview with Priya Mishra, she discusses the cannabis industry in India and her startup Hempvati.

How did you learn about cannabis?
Priya: Stoner friends and the internet. I have stoner friends like everyone else. As my tuberculosis medicine gave me no relief from the pain, one day a friend of mine just handed me a joint so I could at least sleep. That night, I slept peacefully and the pain was gone, that was when I realized this plant was more useful to me than the medicine I was taking and then there was no looking back.

Tell me a little bit more about your business and what made you launch?
Priya: Hempvati is a foundation established in India. We educate, counsel and consult patients, authorities, and professionals on medical cannabis and industrial hemp on various degrees. It was launched to solely spread awareness about this plant which saved my life.

Have you tried to educate your family on CBD? How has your family reacted to your work in the cannabis industry?
Priya: It took me an entire year to open up to my family about my cannabis use and activism. Now, I am wondering why I waited so long because they were surprisingly very supportive of me as saw their daughter better recover, they knew it was a good thing. I had full support once they actually understood the plant and the conspiracy with enough scientific evidence.

What is your favorite strain?
Priya: Mysore mango and Malana Hash

How do you medicate? Do you medicate for a specific condition?
Priya: I use CBD capsules, vape and smoke flower. I cured myself of lymph node tuberculosis only with the help of cannabis and Satvik food (organic, Ayurvedic diet of fruits and vegetables). During that time, I only had access to buds and hence I would either smoke or make oil for myself. Currently, I have a yo-yo spine and PCOD for which I continue taking cannabis and no other medicine helps me treat both the way cannabis works for me.

How do people view cannabis in India?
Priya: Cannabis is embedded in Indian culture, history, medicine, and everything. Most of the Himalayan states have known to use ganja for multiple purposes including medical, cloth, fodder, even as a vegetable. Unfortunately, post the British hemp commission era the entire focus was to remove this from our system.

Where do you see India’s legalization of cannabis?
Priya: We have worked really hard in the past 4 years to make cannabis legal in a few states and also have a central government acceptance. It is working in our favor and as it’s an important part of Ayurveda the ancient medical system of India. I hope to see a full medical legalization soon. Currently in India CBD is only prescription based and THC is only used for palliative care.

Considering the history of cannabis in Hindu mythology, why is it taking so long for India to legalize cannabis?
Priya: Centrally it’s legal, but individual states need to make the decision (same as in the US) I have personally worked with 5 states in 4 years to reform cannabis laws and all have been positive… so it’s a manual job. More people and awareness will speed up the process.

Where do you see cannabis in 5 years in India?
Priya: In 5 years I hope to see India leading the world’s cannabis economy. India alone has over 500 indigenous seeds catalogue – making it the country with the maximum amount of strains! Also, as our culture has used cannabis from the beginning of the time, we should be the leaders in the cannabis industry. The fact that many places in India still use hemp for industrial, medical and even religious purposes will only help expand awareness. Education & awareness is key.

Legalising cannabis could be one solution to India’s agrarian distress