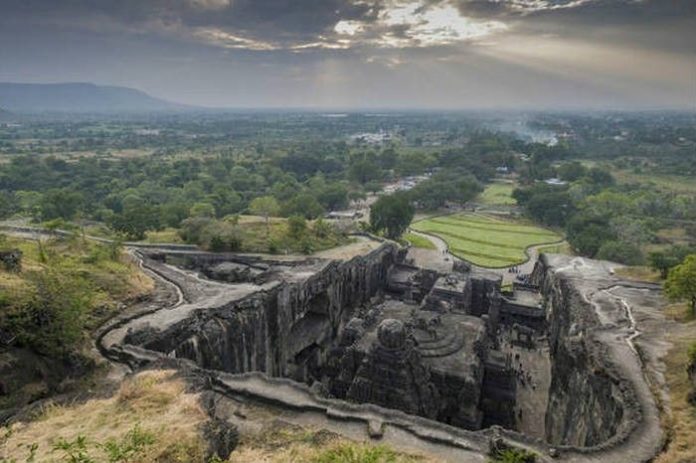 Between the 6th and 11th centuries AD, the Rashtrakuta dynasty and the Yadavs built a group of 34 caves in the north-west city of Aurangabad, in Maharashtra. Carved out of stone, each of these caves was dedicated to one of three religions— Buddhism, Hinduism, and Jainism.

Over the years Ellora has come to be seen as a heritage site that is the epitome of Indian rock-cut architecture, but recent studies by Indian archaeologists have revealed a particularly interesting tradition of the Buddhist monks who prayed in these caves. They used cannabis mixed in with the plaster that covers the shrines painted walls and ceilings, along with some clay and lime, to preserve the structure to the best of their capabilities. And it turns out that the cannabis present in the earthen mix seems to have played a key role in preventing the UNESCO World Heritage site from decaying over the 1,500 years of its existence.

According to Manager Rajdeo Singh, an archaeological chemist of the Archaeological Survey of India’s science branch (western region), and Milind M. Sardesai, who teaches botany at Dr Babasaheb Ambedkar Marathwada University, the mixture prevented the plaster from degrading for over 1,500 years. “The caves are breathtaking examples of rock-cut architecture that stands testimony to the imagination and artistry of its creators,” Singh and Sardesai wrote in the journal Current Science.
For the purpose of the study, they analysed the clay plaster of the Buddhist cave 12 using techniques such as Fourier transform, infrared spectroscopy and stereo-microscopic studies. They were able to isolate specimens of cannabis from the clay plaster and they were able to further conclude that it was the cannabis sativa had helped in preventing insects at Ellora. ”The cannabis fiber appears to have a better quality and durability than other fibers. Moreover, the cannabis’ gum and sticky properties might have helped clay and lime to form a firm binder,” Sardesai said.

According to the researchers, the concrete-like substance that is called hempcrete would have provided the Buddhist monks with a healthy, comfortable and aesthetically pleasing living environment. “As the hemp plaster has the ability to store heat, is fire-resistant and absorbs about 90 percent of airborne sound, a peaceful living environment for the monks has been created at Ellora Caves,” they added.

Several studies have estimated that hempcrete can last 600–800 years, which explains why the life span of these caves doubled despite damaging environmental factors, such as a growing humidity inside the caves during rainy seasons.“Ellora has proved that only 10 percent of cannabis mixed with clay or lime in the plaster could last for over 1,500 years,” said Singh.

As Mr. Sardesai has observed, “In India cannabis has gained a bad name because of its narcotic properties.” However, the artists of the sixth century were able to gauge its properties. They realised that it had the ability to regulate humidity, and that it would have key roles in pest resistance, fire-retardant, non-toxicity, high vapour permeability, along with hygroscopic properties— all of which have kept Ellora intact over the years. In the neighbouring Ajanta, the artists did not use hemp, which explains why rampant insect activity has damaged at least 25 percent of the paintings here.

Considering that in India, the cultivation, transport, possession and consumption of marijuana is banned under Indian law (though things seem to be changing further up North in Uttarakhand) suffice to say that in the modern day India, it might be a long while before we decide to use cannabis for construction purposes.