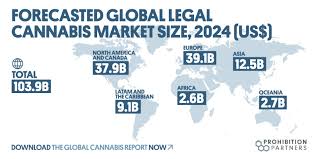 Historically the marijuana industry, is a relatively a new player in the marketplace. In 2014 legal global sales were approximately $3.4 billion. By 2018 that number was up to $11 billion. The industries revenue potential is still continuing to grow at an unusual pace with a projected increasing rate for every year in the near future… but there is a particular category that is projected to outshine all other segments… Its CBD. A recent article by an industry source said: “However, there’s a potentially larger growth trend contained within the cannabis movement that investors simply have to know about: Cannabidiol (CBD). CBD growth could be off the charts.CBD can be extracted from both the cannabis and hemp plant, whereas THC derives almost entirely from the cannabis plant, since hemp often contains very low levels of THC. Hemp plants are considerably cheaper to grow than cannabis, making hemp the preferred crop choice for CBD extraction.” Active companies in the cannabis markets this week include: Veritas Farms, Inc. (OTCQB: VFRM), Aphria Inc. (NYSE: APHA) (TSX: APHA), Village Farms International, Inc. (NASDAQ: VFF) (TSX: VFF), Aurora Cannabis Inc. (NYSE: ACB) (TSX: ACB), Charlotte’s Web Holdings, Inc. (TSX: CWEB) (OTCQX: CWBHF).

So the question is just how big could the CBD market be? The article continued: “Predictive analysis and market research company Brightfield Group believes it has the answer…  In a newly released report from Brightfield, the company is calling for year-over-year CBD product sales growth in the United States of 706% in 2019 to around $5 billion — not a typo – and sales of $23.7 billion by 2023. Comparatively, about $620 million worth of CBD products were sold last year in the United States (based on 706% growth to $5 billion). Growing CBD revenue from about $620 million in 2018 to $23.7 billion by 2023 works out to… a compound annual growth rate (CAGR) of a whopping 107%! Compare that to some of the most robust broad-based growth estimates for cannabis, which call for a CAGR of around 25%, and you can see why CBD is all the buzz (without creating an actual buzz) on Wall Street.”

“As the Full Spectrum Hemp Oil category continues to build mainstream visibility and acceptance, the Veritas Farms team will maintain its efforts to create and capitalize on even more new and expanded retail opportunities.  We expect this will enable us to leverage our industry leading reputation for quality and consistency, and will lead to a continued expansion of our retail distribution network going-forward.”